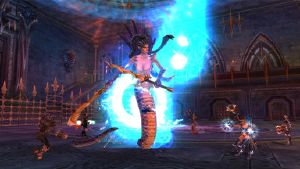 Sirloth has been using the Zurhidon to bolster his might and they carry out his evil plans and create bizarre creatures for his use. Challenge them to battle, bring down mighty creatures and call upon the Demon Lord. If you reach this far, there is only one confrontation to survive before you must face the Demon Lord – his fearsome envoys.— from us.runesofmagic.gameforge.com

To enter this instance you first need to have defeated Sharleedah. The quest for it is in the Manticore quest line.

I would say this is not a very hard boss. It has high damage & high dot, but that's about all you can expect from it. It has a few special abilities which can make you wipe.

This is mainly a boss which requires high DPS and a bit of HP.

A boss which requires speed and knowledge of other bosses. As soon you try to attack her, you'll get stunned and transported to middle. She can't be attacked. She'll spawn 3 bosses 1 by 1. This can be ANY boss from ANY instance (Snow Blake, Yusalien, Geba, Ancalon, Giant Life Leecher, etc.). You need to use the tactic you use at the normal instance as well.

Gotta be fast & precious, if you don't know the proper tactics for those bosses you will most likely wipe. Of course the boss' damage is tweaked massively. For example, AoE from Ancalon hits for 5k per tick.

Once you killed all 3 bosses (Random) you can focus on Lady Hansis, has some nice AoE (pretty high) and high damage here and there, but shouldn't cause a problem. She also spawns snakes from the gates. These snakes need to be killed asap to prevent wiping.

A nice tactical boss if I may say so. This boss has a couple of special abilities.

Between Balothar and Zurhidon Messenger you'll find a summon circle with 'yellow' mobs. Don't be the leroy and run trough and die. Don't be the leroy by random killing them. There's a tactic behind it. Kill the mobs on the sides. 2 of those mobs will drop a costume.

Let 2 players get the costume and stand on the place of the mob you got the costume from (Instructor must stand in 1 of the circles where an instructor is, same for the other side). The important thing is, the casting may not be broken, so there must be a constant 6 casters. If you don't do this, the Demon Lord will appear and instant kill everyone. Once you're in the circle, hit the costume and start casting with the special skill bar you got.

This boss has 3 Phases.

It's not smart to use Blood Arrow at this boss and I advise everyone to fully buff up with attack power and above all HP and magical defense.