This page is in English, but other language translations are supported (see flags to right).

We have always treated Varanas and Obsidian Stronghold as zones, because they have their own maps, but if you log out while in Varanas and then log back in, you can clearly see the system says you are in Silverspring. So, the real answer is that they are CITIES. They are neither zones nor POIs, but a little of both. Since it is already so deep into our wiki that they are zones, with all the categories to support that, we are going to leave them as zones. This should cause no real problems because the name of the wiki page for a place is the name of the place, whether it is a Zone or a POI.

Transporters located in all the major areas of the city will provide instant, free transport within the city.

The History of Varanas[edit | edit source]

One of the first things the Eye of Wisdom did when it reached the shores of the Candara continent, was to erect a city out of the white granite from the Silverspring Plain. This happened 120 years ago and the construction work lasted 20 years. The name of the city was Varanas.

During the next century Varanas prospered and evolved into what it is today. In all that time the Eye of Wisdom took care of the city with grim determination, even though they publicly stressed that this place was only meant as a stronghold.

Their true intentions lay hidden, but plenty of rumors abounded.

In the last years the Council of Varanas evolved into a mighty opponent and shook the balance of power in the city. It combines the most distinguished families, which visibly lay the claim to control the matters of the city without interference. But in the Council itself there are various fractions that compete for power and influence and accuse each other of corruption and incompetence.

Varanas’ high walls and its revered buildings cause many travelers to pause in awe the moment they catch a glimpse of it on the horizon. The city is glorified as the pristine connection of the art of masonry reaching towards the heavens.

Others are not swayed by its beauty and vilify it as the home of greed and unparalleled arrogance. But only thugs, crooks and other criminals think that way and so they were banned years ago.

Even though there are different opinions about the beauty of Varanas, the only way to find out the truth is to visit and experience The White Cathedral oneself. 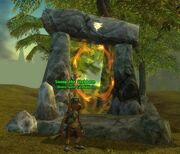 Varanas is the first city that players will reach in Runes of Magic. When you first arrive at the bridge into Varanas you will see the Runic Gate and its caretaker (only do this if you are a human, as elves will want to go to the Howling Mountains first). Be sure to stop and talk to the caretaker at 48.3,78.4 to mark this location for future travel.

After crossing the bridge to the front of the city you will notice on the right side a bulletin board. Be sure to keep a close eye on the daily quests it offers!

Speak to Derek at the gate if you are a new player, he will give you a chain of quests that will introduce you to the many features of Varanas.

You'll find many shops in Varanas's West Wing as well as stables and the Varanas City Garrison.

The Carpentry Shop has tools for woodworking and making weapons. There is also an instructor there to teach you carpentry and raise your skill level.

The Armor crafting Shop has tools for making such items as leather armor, chain mail and plate armor. There is also an instructor there to teach you armor crafting and raise your skill level.

The Alchemy Lab has equipment for making potions. There is also an instructor there to teach you alchemy and raise your skill level.

Varanas East Wing is divided into craft skill areas. This area has Tailoring, Cooking and Gathering.

The Tailoring Shop has equipment where you can practice tailoring and make robes. There is also an instructor there to teach you tailoring and raise your skill level.

The Cooking Area has equipment where you can practice cooking and make food. There is also an instructor there to teach you cooking and raise your skill level.

The Gathering Area has an instructor who can teach you Mining, Wood Cutting and Gathering ad raise your skill level.

In the Varanas Central Plaza is where you will find the Varanas Bank as well as the Auction House.

Varanas Administration includes three areas: the Guilds hall, the Hall of the Eye of Wisdom, and the Classes hall.

The Guilds hall allows you to create guilds, change the guild flag, and view important information about the various guilds on the server.

The class hall allows you choose your second class at level 10, get your first elites, and view some various lists showing the list of people who have done various achievements and have made themselves the best in certain categories.