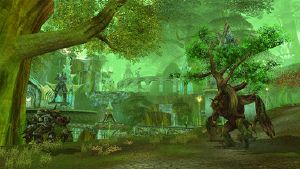 The magic from the Elves who once inhabited this region is now very faint and it is now the dark side of nature that prevails here. Free the valley of mutated beetles, ravenous giant worms, elemental creatures and other diabolical presences.— from us.runesofmagic.gameforge.com

The more you advance into the Deep Corridor, the bigger everything becomes. For that reason it is said to be a holy tree, which has existed since the world’s beginning. Even more mysterious though is the cavern beneath it. It looks as if the tree’s roots keep an underground space clear. In the great cave some things can be found, which are apparently not of natural origin. Inferring from the roots growth the cave must have been there even before the Holy Tree, which is why it is called the “Origin”. Actually the cave was created by ancient mythical beings and in it the “Holy Truth” was stored.

Later on all the knowledge was lost with the disappearance of the mythical beings. What kind of relation does that knowledge have with the oracle? Is it the oracle itself? Nobody knows for sure.