From Runes of Magic Wiki
Jump to: navigation, search
For other articles with related titles, see Raksha Temple. 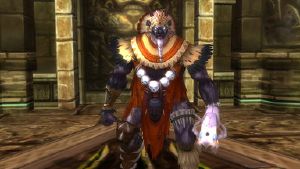 All those who dare defile the Raksha Temple must hold their own against seven guardians and priests who are known to kill in cold blood. They relentlessly chase the indigenous Angren who built the temple in ages past. Help the animal people liberate the temple!— from us.runesofmagic.gameforge.com

In the depths of the forest a hidden temple rises above the canopy of the dark tangle of the forest which was once dedicated to the deity and protector of the Janost Forest, Raksha. Now, however, Annelia the Puppet Master is making a grab for power. She has destroyed all living creatures within the temple’s walls and turns the corpses of the priests and temple guardians into mindless slaves who roam about in the darkness carrying out her evil deeds. Do you have the courage it takes to face up to the horror that lies within the temple’s ancient walls?

At the first door, you have a choice. You can "kick it down" or you can "activate the unknown rune energy", "continue reading", and then choose "Bronze Difficulty Level", "Silver", "Gold", "Platinum", or "Diamond". IF you do this you will see chests (Raksha's Bronze Treasure Chest, Raksha's Silver Treasure Chest, or Raksha's Golden Treasure Chest) appear near the last few bosses when they die. Completion of Diamond Difficulty Level also earns a title, Is the new Guardian of the Earth.

He spawns a number of Ents at the start of the fight, called Spirit of Nature (62 Elite). These will wipe all the squishies in the party. You can run around in circles to try to stay out of their range.