From Runes of Magic Wiki
(Redirected from Morrock Wallinder)
Jump to: navigation, search

To find this mob in-game, use BACKSPACE to open the World Search window, then enter Morrok Wallinder in the Search field and click "Search". Remember, the field is case-sensitive and must be entered exactly as shown.

Morrok is involved in 2 quest series but there is a third related series.

Morrok Wallinder is a half-dragon and the son of the dragon Kafarg Duran and an unnamed human woman from the Wallinder clan. Morrok first contacts the player in Thunderhoof Hills and stays present in the main quest-line up to the end of Sarlo. After the conclusion of events in Belathis Fortress, Morrok becomes one half of the newly shared Envoy of Balance position as the Envoy of Light. He develops a strong connection with Jill Ayekin (who becomes the other half of the envoy position as the Envoy of Darkness) and her brother Loub Ayekin, and comes to view them as his own family. This is due to, by his own admittance, both Jill and Loub being half-dragons like himself. 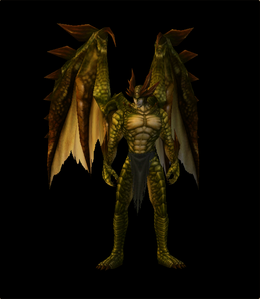 Morrok was born to a woman from the Wallinder clan who had presumably had relations with the dragon Kafarg, Morrok's father. It is believed Morrok is of a considerable age because of a comment made by Catherine Wallinder. She commented that Morrok's name "...reminds [her] of a legend of a young woman from the clan running away with a dragon." This might suggest that because of the story receiving legendary status, that it is relatively old. It can be assumed by racism towards humans by certain dragons and Morrok's attachment to Jill and Loub that this does not happen often and that half-dragons are frowned upon by many. However, this opinion is subject to opposition between dragons, as officially, Morrok was recognized as a true dragon by Lavare and ultimately the dragon council.

Interactions with the player[edit | edit source] 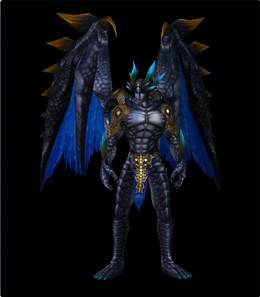 Morrok as the Envoy of Light

Morrok first meets the player in Thunderhoof Hills after Aynara asked the player to assist him. It is revealed he is gathering intellect on unusual happenings to do with drakes in the area. It is later revealed that this is the result of experimentation with the drakes by the Hand of Truth. These experiments occurred in order to give human subjects extended powers by giving them the characteristics of dragons.

Maxim Erekat III, responsible for the management of the Hand of Truth in Thunderhoof Hills, had been using the group for his own ends. He had been making himself more powerful as an attempt at revenge on Dalanis for his defeat in Avano. This resulted in him being horribly disfigured shortly after the Lionheart Knights were made aware of his actions.