Rules for All Minigames[edit | edit source]

It is advised to be at least level 50 to participate in these minigames. Enemies in the minigames are based around your level. However if you are not level 50 or higher you will not receive any

Note: If you are killed within a minigame, you do not accrue XP/TP debt, but you are kicked out of the minigame for the day. (Goblin Mines sometimes gives you XP/TP debt.)

Treasure chests in minigames share a loot table - here's a list of some of the things you can find in them (These are not the same as the Minigame Rewards, which are unique to each game) (Andor Training Range does NOT share this drop list.)

Enemies in minigames will drop items typical for their level, including white/green equipment, tier III or IV runes, and so on.

Attack the machines and kill the guard that spawns from each one.

Guards have poor loot so consider not looting them to save time.

The Golems that may appear from a treasure tile have better loot so you may want to loot them.

The knockdown can't reach you on the edges of the corner tiles.

If you find a bomb, move away by at least 3 tiles to avoid the damage and knockdown.

There are 6 different types of seals in this minigame. Each one presents a unique barrier to your passage through the room, and the minigame focuses on the way this creates a puzzle.

Gear check: Seal (Void Summoning Barrier) has about 10k health, and summons Clown Spirits which have about 20k health until it is destroyed. Be sure you can quickly bring them down, so you don't use up too much time with fighting.

Uber gear check: If you do an astronomical amount of DPS, you can destroy Iron Gates without the need for a cannon. You should be able to hit for at least 50k before this is a realistic option based on the time it takes.

You can use a branch from one Seal (Giant Vine) to burn down another.

You can walk over a magic gate if you stick to the side. This will trigger gates and ghost clown containers.

You can skip opening the chests between rounds, and immediately go for the next round to save time (the Phirius Shells are the most useful reward anyway). Assuming you complete all rounds, you can open chests at the end with one

Fine Key per Treasure Chest, otherwise you lose any unused

Curse Scrolls can be bought inside the instance for

Ghost Card ×10 each before accepting the challenge, and can be found in a

Normal Treasure Chest:
You will receive:

Plus a chance for ONE of the following:

Precious Chest (placed at the end of the row if you meet time requirements):
You will receive:

Plus a chance for ONE of the following:

Please give me a little more time

Who else wants to be cannon fodder?

Three "styles", each with three levels. Nine rounds in all.

Use the Identify skill to identify what is different. The game ends when you get 10 wrong, run out of time, or finish all 9 rounds.

Furniture that didn't exist before

Furniture that changed it's position

Furniture that changed it's appearance

Note: Since this instance was designed for a group, it is by far the most demanding minigame when it comes to having a well-equipped character. If you plan to solo this instance, your character should have at least 20k health and be able to hit for 10k, and bring some potions or be able to heal yourself.

Note: Every member of the group can loot each chest in the instance. There is no downside to bringing in more people. If you're playing with a group, be sure everyone has entered the instance before accepting the challenge.

There are three phases to this game. Completing each phase unlocks a door leading to the next area of the cave.

Note: The Phirius Shells rewarded by this minigame are spread out across the 4 chests in the Elementals area, so make sure to open them all!

Goblin Hero
Trade in 10 Goblin Champion Badges for this title.

Move along, Goblin!
Trade in 100 Goblin Champion Badges for this title.

Green Miracle
Trade in 250 Goblin Champion Badges for this title.

How to Enter: Talk to Ange Rasa in Sascilia Steppes (optional: talk to Kat Rojo in front of the Auction House in Varanas - Central Plaza in order to teleport to Ange Rasa)

Game Layout: A small maze-like dungeon that requires you to sneak past enemies instead of being able to fight them. All your class skills will be disabled, but you will be given event skills that will help you avoid detection.

Objective: Light the 3 Elemental Lamps and then reach the treasure room in the middle of the map to collect your reward.

A good guide and detailed map can be found at https://forum.runesofmagic.com/showthread.php?t=174361

Except for your starting location, and the placement of the Elemental Lamps, everything else will be in the same place every time in this instance.

Note: One Elemental Lamp will be found in each of the rooms with a red lamp icon in it. Each room has 2 possible locations for a Lamp - only 3 of the 6 total locations are marked on this map. 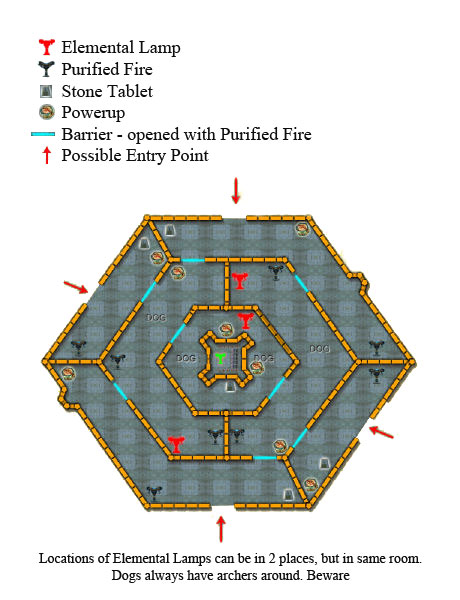 Treasure Seeker
Finish the minigame once.
(Talk to Ange Rassa)

Owner of the Treasure Mountain
Finish the minigame 100 times.

You get an Extra Skill to use, it 1 shots the mobs in Andor Training Range.

There are 2 modes to Andor Training Range:

No matter which mode you pick there is an overriding rule. Don't let them cross the red line on the right. Once 5 Mobs get across there, It's Game over!

Phirus Shell ×?? (depending on your score)

No matter what your score is these rewards are randomized. You can receive up to 3 Guild donations, and up to 3 Certificate Rewards. It has been noted, and confirmed, that the drop chance increases the higher the score. This means on an average Player 1 with a score of 3,000 will get more rewards than player 2 with a score of 2,000.

You need to hand in one of each certificate to Kate Wesker to receive Turn-In Rewards.

You Will ALWAYS receive 3 rewards.

Plus 1 of the Following:

I currently hold the highest score in Andor on my server. Many people have asked me how I get such a high score. There are 2 ways. The first is illegal and that is setting up a bot to auto click for you. The second is setting hotkeys. I recommend setting the key for shooting the skill to NUM1 if you are playing with a keyboard with the Num-pad.


The second trick is noticing there is no CD (cooldown) on the skill. There is a GCD of 0.1. This means you can only hit up to 10 targets every second. Even I am unable to aim that fast. This means the only limit to how fast you can kill the mobs is how fast you can click.


Mouse sensitivity is key here. You want it high enough so that you barely have to move the mouse to get to the next mob. But not to high that you scroll over the next mob. On top of this always aim for the front of the mob if possible. The server and the client are not perfectly in Sync. The lag is dependent on your ping. The higher the ping the further forward on the mob you want to aim.