Lair of the Demon Dragon 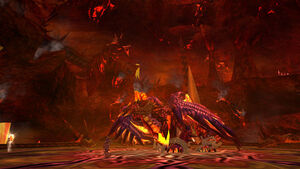 The strongest dragon of them all is being held in captivity by the Naga, which they are planning to use to bring down Taborea once and for all. Remove the dragon from the clutches of the Naga and intervene in their evil scheme. If you manage this you will have the chance to battle with Gestero himself, but if you fail, the strength of the Naga will continue unabated.— from us.runesofmagic.gameforge.com

There are a total of

Ancient Memento ×10 in this instance.


Strategy:
Once the Jailor has been killed, groups of 3 nagas will start spawning from the entrance (where you came from). The nagas drop items that have a live time of ~2 minutes. These items will be used to break Gesteros chains, the orange dots* represent the runes that chain Gestero. Use the runes on all 4 and the boss fight will begin.

Do note however, that regardless of wether or not you free Gestero or not, the nagas will spawn 10 times, which means that you should break 3 chains, then wait for the last naga spawn and only then break the last chain. Buff pots & foods will be used right before breaking the last of the chains.

When Gestero is freed, 2 things will happen: 1) He will be vulnerable for a little while, in which time the tank grabs agro and moves to tanking position (either right or left side on the map above, the other raid group will position themselves on the opposite side)

2) Zurhidon meeps and nagas will spawn from the top-left and top-right in relation to the map above. The Zurhidon's will cast a spell that will repair Gestero's chains, these must be interrupted at all costs.

After they are dead, the tank & spank will begin: Tank group will remain where they are (near either the left or right green dot) and the other raid group will move to the topmost green dot. Full DPS on boss from now on, you will have about 10 minutes to kill the boss after which another boss will spawn and rape you.

From time to time, Gestero will yell: "Disgusting vermin! Gesteros fire will cleanse the earth!", apparently casting some instant spell that will do damage to group members (doesn't say wether it's just a blast, a DoT or periodic damage), priests will GH to keep everyone alive.

After that, Gestero will yell: "Bashtei era Keaqtei oitei!" at which point he will begin casting a spell, when it is cast, the room will fill up with flames and most likely people who are unprotected will die. This is where the Runes in the room come in (green dots), clicking on the rune will give you a protective bubble for a few seconds that will let you survive the spell (you can click the rune in the middle of casting a spell), the rune should not be clicked earlier than when Gestero's cast bar is 2/3 full.

Come in, kill the Jailor. Kill 10 spawns of nagas (3 nagas per spawn) and break 3 chains (orange dots) while killing them. Once last spawn is dead, break the 4th chain -> Assume positions on left & right and use buff pots & foods. Interrupt Zurhidon's from repairing chains and kill the additional nagas as well (spawn from topleft & topright in relation to the map in the link).

Tank & spank near green dots, when gestero yells: "Bashtei era Keaqtei oitei!" then wait until cast bar is 2/3 and click on rune. Repeat until dead.