For other articles with related titles, see Kawak's Tomb. 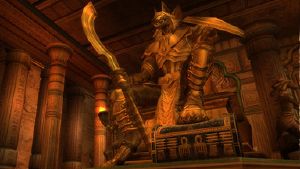 Surrounded by his treasures and guarded by the Iron Teeth, Kawak Angerfang lies in wait in his mechanical death trap of a pyramid. Adventurers be warned: It will take more than just cunning to survive the fearsome guardians and the deadly architecture.— from us.runesofmagic.gameforge.com

Kawak’s Tomb is buried deep beneath an enormous pyramid in the southwestern region of the Limo Desert. Players will uncover long-forgotten relics in the burial chamber that once belonged to the great war hero, Kawak Angerfang, which are theirs for the taking. But beware: the treasures are jealously watched over by hundreds of guardians and a ferocious Anubis. Players at level 60 can set off in search of the treasure and the legacy of Kawak Angerfangg.

The mightiest guardian is known as Anubis, a titanic Clockwork construction that resembles an elite warrior of the Limos. Floating in midair, this powerful construction will make short process of adventurers by using both magic and the huge glaive he is wielding.

Anubis is the last of 5 bosses in the instance.

Kawak’s Tomb offers a confounding series of booby-traps and puzzles before you can reach the last of five guardians lurking in the tomb. And of course, bringing down these five tough new opponents will require new strategies and tactics.

Be it flipping the right switch in one room, dodging spikes in another, or defeating opponents in the correct order, the new instance will put the heat on even the most experienced and best equipped players out there. As soon as the coast appears to be clear, the next guardian appears, itching for a fight. This is assuming that you are able to find and open the half concealed passages that lead to the bosses. A stronger opponent waits behind every door: A legendary general, a mutant beetle and three Rune Guardians possessing magical powers stand in the way to the golden sarcophagus of Kawak Angerfang.

A small scarab, invisible at first, also plays an important role, waiting for players in the passages of the tomb. There is much more to this tiny beetle than first meets the eye. Adventurers that rashly go after every glittering treasure chest will endanger their entire party. But gamers looking to discover the secrets of the legendary general, Kawak Angerfang, must prepare for a fight.

Herbs of Omnipotence and