Double Your "Dailies", Double Your Drops! - On all, or very nearly all, of the Daily and Public quests that require Quest Drops from Mobs, if you have both repeatable quests in your Quest Journal at the same time the mobs will drop Double the items, cutting your harvesting time in half! This may be considered a bug or exploit by some, but I like to call it a feature.

Zone Completion Title (level IV): Conspiracy in the Sign of the Light - Complete all of the above titles.

Harkonnos [Leader of the Earth Beings] (under the first bridge, just south of where you found the Hidden Treasure)
unlocked by completing Tree Plague in the Pirate Island quest series

Remember... strange women lyin' in ponds distributin' swords is no basis for a system of government.

Ghosts do not live by bread alone: 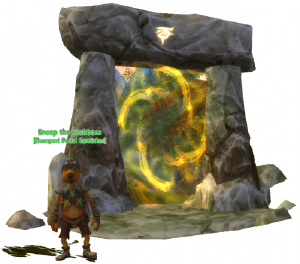 Kay
unlocked by completing Flown the Nest in the Pirate Island quest series.

Sailor of the Leorden Stronghold [Shotak Pirates]
unlocked by completing Flown the Nest in the Pirate Island quest series.

On the map this is labelled Land of the Guardians

You may now cross through the Morfan Barrier and enter Nirfan.

The Pillars of Morfan[edit | edit source]

This is an Instanced Dungeon.