Hall of the Demon Lord 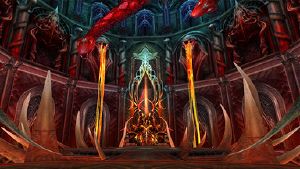 Come to the Naga acropolis where Sirloth is preparing his troops for victory over Taborea. Destroy him and save Taborea. If you manage to survive the onslaught of four mighty bosses, you’ll come face-to-face with the Demon Lord himself.— from us.runesofmagic.gameforge.com

Before you start the fight. To enter the last chamber (Sirloth's Chamber) you need to kill Gestero and have the Quest Item(Epic Quest Line IV). For this instance I will also try to post a detailed description of how to do the trashmobs.

You shouldn't have any problems with the first set of mobs, should be like you always do it. At a certain point there's entrance which has a path which goes down. This is the part where it goes tricky-mode. You'll need a priest with soulbound ready (Only 1 soulbound).

The gate which activates the alarm

As soon you go trough the doorway it gives an intruder alert. This triggers an effect which spawns alot of mobs from crevices which spawn. You'll also find 2 rooms in this small path. Each of these rooms has a miniboss. You need to kill both of them to get 2 rune pieces. These 2 rune pieces are required to deactive the pillars which deactive the spawning of mobs

The usual tactic is, as soon you walk in (Use nobodies rum), kill the first miniboss, loot it (1 person should get both the runes). After that walk straight to next room. Die just around the corner inside the room. Please remember, as soon you leave the room of the miniboss, it triggers the intruderalert effect again. The priest will resurrect once the intruderalert mobs have disappeard. You'll now have to kill the 2nd miniboss. This boss has a 18k AoE and needs to be killed fast.

After that give the player who is in possession of the 2 runes 'Speed' and let him use Nobodies Rum. Run further down the path and activate the 2 pillars.

The 2 pillars which have to be activated.

After this you'll have to kill some mobs again. You'll soon reach 2 executioners. Each of them drop a

Condemned Rune. 2 players should have 1 rune each. You can use them for this boss-fight.


Strategy:
This is a pretty easy boss. Tank takes it to the middle and tanks it there. It basically has 3 skills it can do.


Strategy:
Probably the easiest boss in this instance. There are 4 beds, every bed should be 'taken' by 1 player.

There's a few skills Yash has.


Aosniya isn't really hard. Tank pulls it and basically it's just tank and spank. Whatever you do, don't hit the adds which will appear, just kill the boss). It's a bit the same like Jiasha. The tank has to take aggro on the adds though.

There should be 1 thing you have to look out for.

Fire-Eating Demon Fairy - This mob can cast Splitter (Which continues to cast after death) which clones himself in 2 new mobs.


Strategy:
This is probably the hardest boss in the instance. Before you walk in you must take full food and have full mana. During this fight you can't use ANY potions.

When the fight starts it's important that everyone stays at max range from the boss (Excluding melee of course).

This boss has a few abilities:


Strategy:
This is a boss which combines tactics from other bosses.

When you start the fight he'll spawn 2 adds. A Melee (Left) and Magic (Right) add. They have to be killed at the same time (Origin).

After that the Demon Lord comes, it has quite a few abilities to try and kill you.

At 40% it goes freaky mode Of course this phase has new special abilities as well.

Also, bear this in mind throughout the fight: