From Runes of Magic Wiki
Jump to: navigation, search
For other articles with related titles, see Hall of Survivors. 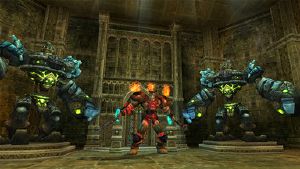 Rise to the challenge and put an end to one of the greatest follies in the history of Taborea. Amongst lava-damaged ruins lurk seven gigantic man-made guardians which have evaded eradication. Destroy them and their leader, Andaphelmor, before it’s too late...— from us.runesofmagic.gameforge.com

All trash mobs are 55-57 Elite. All mobs in this zone are Machines unless race is otherwise noted.


Strategy:
Only thing you need to watch is the 3 horses that randomly appear,
try to stay in the middle lane of the field and a bit to the start of it so you can watch further and have more time

3 horses will come running down the field,
1 horse won't move.
Goto the free lane, or stay put if it was the middle one
when the flames clear, go back to the middle lane
(flames do 2000dmg/sec on easy)

Careful! don't use Discharge on the Boss so keep it a few tiles from you mages and healers

The other 3 mobs are usually called by color:
Red
Blue
Green, Can cast Horror(Fear)

Every now and then the boss will call out a name and throw a weak AOE attack on that player,
that kills all the adds surrounding it

Little circles are spawned near the boss which increases the damage done on the boss
(boss seems to get the buff himself too, but doesn't seem effected)

Boss will spawn red balls (Like Red Uguda, Cyclops Lair) using the attack Electric Charge
kill these balls as they will do damage to the whole field when the boss makes them explode with Magnetic Attack
(2000dmg to whole field for each ball in easy)

Boss will draw in a crystal twice quick in a row starting with the attack Energy Thirst
All except tank help killing that crystal, Boss won't attack at that point
(Good time to take some potions too)
If the boss grabs the crystal he will get a buff


Kill the Light Warhorse and then Mantarick to get to Sydaphex


Kill the Light Warhorse and then Mantarick to get to Sydaphex


While tank occupies Sydaphex, other players may get a debuff with a color. Click the colored crystal matching the color of the debuff before the timer runs out. 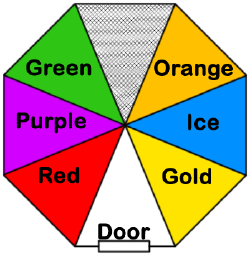 Door color and locations. (mesh area is no door/color)

There are 6 different colored doors you need to pay attention to. While the tank keeps the focus of the boss in the center of the room, everyone else needs to select a door with a color and when they see a mob with a name in reference to a color they must grab the attention of a mob, take it to the corresponding color and kill it. Once dead the mob will activate a seal (a glowing circle) right in front of the door. When all mobs are killed or a certain unknown amount of time has passed, everyone in the party will receive a "color" in their debuff row under the mini map in the top right corner of their user interface. Depending whatever color it is in the debuff area, the person must run to the corresponding colored door and remove the debuff from inside the seal. Quickly step in the seal then right out. Standing inside the seal when the next wave begins, will cause the person to instantly die. Standing next to someone when the next wave begins, causes both persons to die instantly.

Note: The BLUE door is referred to as Ice by the monsters. In other words, the name of the monster will be Ice, not Blue.