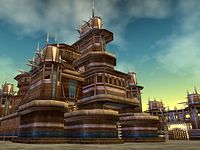 A guild may build a Guild Castle when it reaches level 5. The castle is accessed by talking to the Guild Castle Administrator in Varanas or other cities. The castle offers a number of features and plenty of space for smaller communal rooms or larger guild gatherings. These can all be furnished by the players with furniture. However, furniture is only for decoration and will lose any bonus effects provided in a player house. A castle may also contain a throne room which allows the guild to wage war on the Guild Castle of another guild. Finally, a castle contains a shared guild vault where guild members may store shared items.

The guild leader sets the permissions which allow players to install and move furniture and other Guild Castle tasks. The Guild Castle may be accessible by visitors or it may be kept closed. 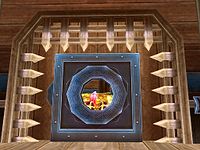 The Guild Castle vault starts out with 100 slots which guild members can place shared items in. The guild leaders can control the use of the vault and decide who has access to the slots. The vault may be upgraded to increase the number of slots available.

Plans for Runes of Magic include allowing rival guilds to attack your castle. A castle might be a strong bulwark of tree trunks, iron and stone. However, it will still succumb to attack.

Depending on the level of individual guilds there are a number of defensive accessory options available. Multiple gates and walls will keep the enemy away from the heart of the fortress. Parapets allow the attacking of any storming opponents from strategically advantageous positions with arrows and magic, so that they can be held in check. Trapdoors let the close combat warriors appear in the midst of their adversaries, offering the advantage of surprise.

However, if the tables are turned and you're the one attacking be prepared with your own advanced plan of attack.

To build and furnish a Guild Castle a significant quantity of money and resources is required. The effort of many guild members will be required to provide gathered resources, guild runes, rubies, and gold. These resources are added to the Resources tab of the Guild page. See Guild Resource Costs for costs involved in leveling a guild and the resource values.

Once these resources are placed in the Guild Resources then the guild leader can receive the construction permission from the Guild Castle Manager in Varanas. The guild castle will then be erected automatically. 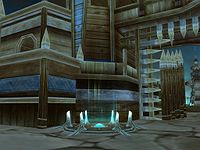 No building in the castle, at this point, can excess level 7.

There are Production buildings which allow guild members to harvest production materials. These include Fields, Forges, and Lumber Yards. Other buildings provide guild members which buffs or skill advantages.

Buildings may be built inside the castle walls. These buildings are part of a technology tree and provide benefits to guild members which scale with their level. All castle buildings must be placed on a foundation. Additionally, an Academy must be built before any other buildings can be built and it must be upgraded in order to upgrade other buildings.

After building the rune towers, there are still activation and maintenance costs in gold for having the towers active in the castle. Initial activation costs 5000 gold per tower level and is only needed once the guild leader enables a rune tower. Maintenance cost depends on the cumulative sum of the towers' levels: 8,736 gold per level each week, which is 52 gold per level each hour (for example, it costs 3 * 4 * 8,736 = 104,832 gold per week to maintain 3 already active towers of level IV each).

Predestined, doesn't use a foundation