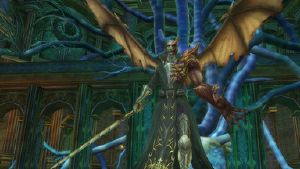 Put an end to the gruesome experiments in Maxim Erekat III’s laboratory. First eliminate four of his grotesque creatures and then come face-to-face with Erekat III himself.— from us.runesofmagic.gameforge.com

Deep beneath the capital Dalanis, a dungeon for aristocratic criminals has lain hidden for centuries. Corrupt Prince Maxim Erekat III used this prison for his horrific experiments, and cruel monster were created there. With the main release of Chapter III, adventure groups from level 57 will be able to access the hidden horrors under the city of the king. It is up to you to confront the dark prince to prevent further experiments.


Overall, this is a very easy instance. Most bosses are not very tactical and the trash mobs are easy to kill.


Strategy:
This is tactically a very easy boss, but he really hits hard and deals massive area damage. Tank should have at least 30k HP unbuffed and a decent amount of physical defense. The tank should keep the boss turned away from the party, because his hardest hit is a frontal area attack. From time to time, the boss will disappear and a black spot will signal the place when he will spawn again. Avoid this spot at all costs! If you're on this spot when he spawns again, you will receive a massive hit which is most probably a one-hit kill.


The boss also has a large range and a close range AoE and randomly shoots fireballs to players.


There are only two things you need to be careful about. First of all, the boss will cast a fear spell on the person with most aggro. This fear has to be cleaned, otherwise it will never end. It's a harmful effect. The second thing is that the boss will summon three copies of himself. If you dont kill at least one of them fast enough, the real boss will regain some of his HP.

Tank'n'spank boss with one thing you need to be aware of: sometimes, he will cast an area attack which takes 90% of everyones HP. The healer(s) must be prepared to heal up the tank quickly.
Also, two types of fogs are spawning around the room. One type will improve your attack but decrease your defense and the other type will improve your defense but decrease your attack. You will gain 150 attack and lose 150 def with every stack (or the other way around), so those buffs are kind of useless. However, if you get both buffs at the same time, you will get a short buff which will protect you from the 90% hit.

This is the only difficult boss in the instance. He hits really hard with both single target and area attacks.
There are two things u need to know here.
At some point, a big shield will spawn in the room. Everyone needs to run close to it. A little while later, the boss will call the name of a random player. This player will get stunned. Immediately after this, the boss will start a four-second cast which is going to kill the stunned party memeber. To protect him, one person needs to pick up the shield and stand between stunned character and the boss. You can also try to interrupt his cast, but this does not always work.
Right after this, whether the player has died or not, the boss will fly up. You can't attack him while he's in the air. He will start spawning dark fog spots on the ground which take 5k HP per tick. Everyone needs to avoid this fog. The best way to do this is to move as a group.