Cave of the Water Dragon 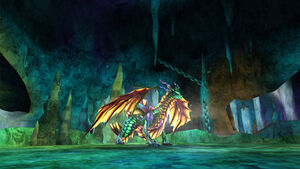 There are demonic rumblings echoing through the tunnels of a cave, where worm creatures and elementals keep watch over the slumbering water dragon, Lytfir. With the arrival of Chapter II he has awoken and hungers for flesh. Quell the mighty beast and send it back to the netherworld.— from us.runesofmagic.gameforge.com

Cave of the Water Dragon is a level 55+ Instance. The entrance is in Moongorge in Howling Mountains. To even enter you need to have the King of Water's blessing from Weeping Coast. This start of the quest chain is in Wayt Camp in Savage Lands.

Water Dragon Instance is best known for crafting materials for level 55 items, such as the Lyk set, but extremely better in all aspects.

All the mobs will drop mats for everyone, so make sure to have everyone loot the corpses, the items will unbind eventually or you can split the stacks and they will then unbind as well. I recommend to have someone in your guild store all the mats to see how much you have.

When you enter, there will be various types of mobs beyond the bridge of the instance. Most of the mobs appear to be chained and will typically all come as a group, bring a druid for poison cleansing and to perhaps pacify pulling to weed out the mobs to a number easier to deal with. If a druid is not available, bring plenty of CC'ers.

I don't have the names of the mobs as of this writing but I will describe them as best I can.

The little ice looking mobs: 1. They will freeze the initial puller and then charge, it may be the puller but it has shown it can be someone else as well. They can hit very hard when they charge. Best to get someone other than the tank pull them from range and we found a tank can interupt their charge if they charge them once they are pulled. Dies fairly easy after the initial charge if the tank misses a charge.

Crabs 1. They have high physical defence but doesn't seem to do anything else that I recall.

Poison Newts 1. They explode to a poison cloud once they are killed, everyone should scatter out of range till it clears as the poison can kill someone very fast, it is about 2k+ per tick.

Next area after the large domed room where you initially met the old man who gives out quests.

Maggots 1. Typically in groups of 4 to 7, have a tank pull them or charge them, have everyone stay close in a group and then have a mage discharge and AoE them down. They will drop parasites onto group members and they in turn will spawn smaller maggots.

The larger Water Elementals 1. All of them needs to be killed to open the barrier to get access to Lytfir at the end of the instance. They do some type of AE damage close range and spawns 4 smaller versions of itself when it hits about 40/50%. Can easily be AoE'ed down as long as the mage is kepted healed as they do a fair amount of damage and can possibly kill the mage if not careful. Some of them are immune to certain types of damage so melees should be aware of the targets and which one they can kill. Tab target to see which are immune.

Once all the large Water Elementals are dead, the barrier at the bottem of the ramp will disappear and you drop down off the pathway and head towards the end. Before you cross the last bridge, buff everyone.

Lytfir has just under 4M HPs. Has a confusion skill which he seems to randomly hit people with, doesn't seem to hit the tank with it as our tank was never confused, takes to the air at random (may only perhaps be hit from range when he does this).

Once you cross the bridge, Lytfir will be at the back of the large room, he will go towards the group once you past the bridge. He has a random skill that confuses people and makes them run around for about 20/30s. Crystals on the ground from someone else may be used to dispell this effect from what we can tell but didn't get a chance to try it. We know it cannot be used on yourself though. The crystals on the ground that you pick up will also disappear after a short time so they will either have to be used fairly soon or they will expire.

Every once in a while Lytfir will take to the air, he can still be hit from range, not sure as to the melee's, but he doesn't seem to stay in the air for long.

The crystal ball that you receive from the old man seems to be clickable and may reduce Lytfir's damage, but this is purely speculation. But it will put Lytfir to sleep once he hits about 40% and the battle is over. It is reusable every 30s or so. Once he is put back to sleep you complete your quest and a chest appears, we got two blues out of it, but one of the pieces are needed to make the armor from the NPC's from the front.