From Runes of Magic Wiki
Jump to: navigation, search
The information on this page changes, a little or a lot, each year. The following years are links to past versions of this page.
Archives: 2015 • 2016 • 2017

Zachariel was a Great Mage of the Eye of Wisdom from the time 400 years ago when the Eye of Wisdom was still residing on the Kolydian continent. He was well known because of his benevolent deeds. In the midst of a harsh winter he would provide the needy with supplies.

Once the people of the Eye of Wisdom had come to Candara, they decided to keep this habit in order to foster a peaceful relationship with the local people. When the season of heavy snow had come they would, just as Zachariel had done, wear a red robe and provide the local people with supplies. This gesture helped many endure the long winters and also built trust between the people and the Eye of Wisdom. Soon we were doing this every winter and it became a custom and was named the Snowflake Festival.

After the Phirius Workshops had been set up, they meant to take advantage of this custom and decided to make some modifications to the red robe and thereafter let their people wear these robes while delivering presents to little children. Their actions won many praises from the people and also allowed them to make more money.

The Phirius Workshops taking a fancy to this custom would make the Snowflake Festival an even bigger event in the years to come. Each year more and more people took part in these activities creating this wonderful and exciting atmosphere that we can experience during the winter season nowadays.

The Bad Jingle Brothers will always be in the same spot, so once you find them you can build them into a route and just keep moving from spawn to spawn. For instance, in Howling Mountains there are six. Three are north of Logar: Barrow around 31.8, 14.3, just off the road in the Boar area at 45.5, 29.1, and in Sevaida Woods at . Three are South of Logar: Just north of Pioneers Colony, and two more to the south of the path from there to Logar.

World Search will only see three, one in each of Howling Mountains, Aslan Valley, and Dust Devil Canyon.

The following items have been placed in the Item Shop for the season.

They are mostly the same items as last year, and mostly on the same day, but a few are rearranged.

In Varanas Central Plaza you will find a number of NPCs to talk to about the Snowflake Festival!

Nina Berlusco [Phirius Workshops] (near Kolu Max) - She will take any Festival Fireworks you have and exchange them for something better.

In addition to whatever rewards they offer, some of the NPCs below may feel moved to Bless you with a one-hour buff.

Gifts of the Snowflake Tree:

There are a number of Candy and Cookie items available from this event:

There are four costume sets available for each gender.

Save the Snowflake performance[edit | edit source]

Mishap at the Performance[edit | edit source]

All mobs have a chance to drop

Once per day you get a

Goody-Goody Certificate, along with other presents, including a decoration for the tree. See Snowflake Tree Decoration.

There are 4 packages available, one from each of the four Snowflake Festival Gifts, all with the same name but different icons. The icons match the in-game appearance of the object they came from.

You may click on each of the four boxes once per day, receiving

Snowflake Festival Package ×4 each day and from each location.

Items received from the 4 Packages come from the same list and all items expire 7 days after the box is opened. You will receive 1 to 4 of an item from the following list:

Slippery Boar Oil to free them. She also says how many are stuck in each town and promises a grand reward if you can free all of them (you can only free one per day, though).

There are 4 stuck in Logar, 3 in Silverfall, and 3 in Harf Trading Post. This is a jumping game. You have to work your way up to the roofs to get to each Jingle Brother.

If you want the easy reward without all the jumping, just give the boar oil to Donichiuka and get your

If you choose to "Volunteer to Help" she takes your

After turn-in, Donichuka will gladly transport you to Varanas Central Plaza for free!

Save the Snowflake Gifts[edit | edit source]

You may find a large Goblin Robber (15) in the bank, fighting the Bank Guards. Defeat him and he shouts ULTIMATE ... SKILL ... !! INTO PIECES!! and he bursts into dozens of small Goblin Robbers who yell Bye-bye! and run for the exits. Click on as many Goblin Robbers as you can to get a Ic Money Bag from each. Give these to a Bank Guard for a

NOTE: Thanks to the lag caused by that many mobs appearing and moving, this is almost impossible to do on older PCs.

Unknown Gifts to receive an ornament.

However many you give him, you also receive a

Goody-Goody Certificate but only with the first exchange per day.

The gift you receive does not depend on the Ornament you used, but the quantity does! Item selection (1-3 items) is random from the following list:.

You may enter the Snowflake Arena up to 10 minutes before the fight starts!

Talk to Paige Gingerbread to be teleported to Snowflake Arena where you will have to defeat new enemies! Your end score is determined by combining amounts of how many times you hit the enemies (Hits) and how many times you were hit by the enemy monsters (Transformation Counter).

In each wave you will face:

Speak to Paige Gingerbread after the fight to get

Festival Fireworks ×5 and a number of

Goody-Goody Certificates based on your score (

BIG HINT: Because the rewards are based on number of hits rounded up, you get more

Goody-Goody Certificates by hitting an enemy once, then exiting and collecting rewards, then re-entering (even if you got Transformed)! Using this method, in a single 1-hour session, on an older computer without an SSD, I made

Talk to the Snowland Explorer Transporter to be transported to Khazor's Watchtower in Snowland (an exact copy of Ystra Highlands but with different mobs and quests). All quests in this zone are repeatable ONCE PER DAY.

Note: You cannot ride a mount in this zone, nor can you use any of your class skills.

Lighting a Fire: In order to light a fire you must use

Firewood for Making a Fire, and then

Mr. Magga's Common Tool Set. It does not last very long (30 seconds?), goes out the moment you step away and cannot be re-lit, but it will give you a moments breathing space to thaw out.

While in this zone you will see an effect on your Effects Bar called "Warmth". This has a 3 second duration and, while you are near a fire, refreshes every two seconds and reduces 4 stacks of "Bitterly Cold" per second. If you are away from a source of fire, every second without "Warmth" adds a stack of "Bitterly Cold", which slows your Movement Speed. Eventually, if the stack gets to 30, you are "Frozen Stiff" and, after 30 seconds, you become numb and pass out. Don't worry, some kind pioneer or adventurer finds you and takes you back to the bonfire at Khazor's Watchtower where you recover. This does not affect XP or TP Debt.

Any source of "Warmth" will keep you alive, including a bonfire, a torch along the road, a hand-built campfire (see Lighting a Fire, above), or

The three greatest hazards of the Fire Swamp are the Flame Spurts, the Lightning Sands , and the R.O.U.S.'s! Wait, wrong epic...

The three greatest hazards of everywhere away from a fire, outside of freezing to death, are the Winter Ice Crystals, the Snow Bears, and the Snowland Mad Rabbits.

As you explore Snowland, be on the lookout for a Treasure Chest Covered in Snow!

Firewood for Making a Fire x10 and

Mr. Magga's Common Tool Set. He will do this once per day.

Frost Reward Ticket x10 for a 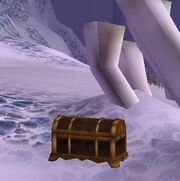 The Mysterious Treasure Chest, behind the big skeleton, requires the

Secret Treasure Key. You can get this by handing in both the

Silver Key and the

Throughout the tower you may find Treasure Chests Covered in Snow and, in the room at the top of the tower, the Snowland Treasure.

Beware the Gargoyles as any use of fire near them will awaken them and cause them to attack, but your

Gift from the Snow[edit | edit source]

She also gives you

Moer's Snowman and asks you to deliver it to Moer in Varanas Lower City East. Don't dawdle, the

Moer's Snowman will expire in 60 minutes! She gives you an

Ancient Treasure Key for your trouble.

Hold on to the keys you earn! You will need these keys to open any

Andrew's Gift Boxes that you earn during this festival!

When you complete a Deer Feed quest you get a 48-hour "buff" on your effects bar, "Deer Adoption". You need to return the next day after the Daily reset and complete another Daily before this buff expires. The highest you can get the rank of "Deer Adoption" to is 6. When it would be increased to 7 it vanishes, resetting to null.

Every time you complete one of the Deer Feed quests you will receive some gift of appreciation. The value of this gift increases with your Deer Adoption rank at the time. Below are some of the gifts that have been received and the Deer Adoption rank before it was increased:

Sometimes you get 2 gifts. When this happens you will also get an extra boost of +1 to your Deer Adoption rank. Also, at each rank, you have a chance to pick up a

About Travel: There is no Event or Snoop Portal to transport directly to Dalanis Gates from Varanas. Your three options are: Snoop to Ancient Kingdom of Rorazan then to Thunderhoof Hills from there, Go to Obsidian Stronghold Mercenary Square and talk to Hajikar Mashes [Envoy from Dalanis] to transport to Dalanis, or use your Transport Book to Portal to Dalanis Gates (you did remember to drop ink there, right?). One costs 4,400

and the other costs a

Transport Rune, the cheapest is 10 gold (transport from Reifort Camp or Varanas to Obsidian Stronghold). Use

Recall to get back to Varanas (or wherever you are registered) and use Hajikar Mashes [Envoy from Dalanis].

This category has the following 9 subcategories, out of 9 total.