Below is how this page appeared in 2019.

This event as it appeared on the forums: https://forum.runesofmagic.gameforge.com/forum/thread/3894-we-re-celebrating-10-years-of-rom-collect-your-gifts/ 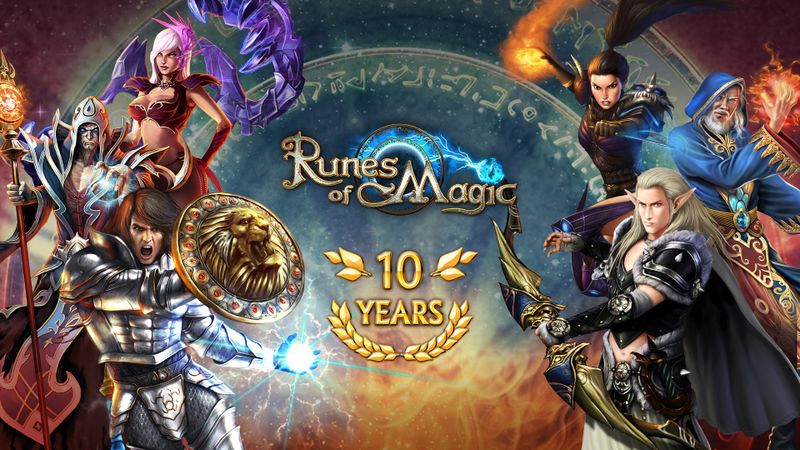 In 2019 the Anniversary Celebration started on March 14th and ended on March 31st, launching the Spring Rain Festival.

Log in each day to increase your Frog Mania rank, up to a max of 5, which grants a number of

Celebration Certificates equal to the rank of Frog Mania, plus a

8th Anniversary Gasha. The effect last 1 day (ignore the value under the icon, look at the mouseover) and refreshes when increased. You must log in between the daily reset (7am Pacific, 9am Central) and before the effect's timer expires. Simply staying logged in does not increase Frog Mania, you must be logged out and log in within the daily window.

Making the Permanent Mount: You need

From March 10th to 19th the Daily Loyalty Reward will gift you a special reward.

Gifts received this year include:

Beginning on 3/19/2019, the following sets are "for sale" in the Item Shop for free. Purchase is limited to 1 per account.

From March 22nd to March 31st, kill the following bosses to earn

In addition to these instances, you’ll also find bosses in the Ancient Dreamland during the event which will reward you with an additional

Coins of Generosity for each boss defeated.

Head to the Varanas Central Plaza (Channel 1), where (once per day) Owenstein will exchange

In the center of the Varanas Central Plaza, find the 10th Anniversary Cake each day and get one of the following:

When you zone into Enigma Zone you may end up under the landing platform in the middle of the Core Field. If you do, do not panic! There is a way out! Just change your point of view to under the platform so you can see the blue-green glowing lines. Now maneuver between them to get closer to the outer-edge of the platform and, as you approach, jump repeatedly. One of them should jump you out. It takes some practice but is not that hard once you see it happen.

Collect Dimensional Data in the Enigma Zone from Resark. Avoid the special beam or be frozen for 10 seconds and earn a rank of Data Corruption (which reduces your score) or until the current Resark is defeated. If you are struck by another special beam, add another rank of Data Corruption and your digitized state is extended another 10 seconds. Attack the Resark to get Dimensional Data. When all 3 Resarks are defeated, speak to Toris Misty in the Core Field to be returned to Varanas Central Plaza.

Regarding Resark: N Mode: IF you get caught by his shields, the digitized effed will refresh every time the shields hit you again. There is no way to get free short of going to the Escape menu and using the Stuck Report or waiting until other players kill it and sucking up all that Data Corruption.

After you return to Varanas, give the Dimensional Data to Toris Misty in Varanas Central Plaza to get

Enigma Cubes, then eventually give

Enigma Cubes ×10 to Ike Misty to get a

Digital Enigma Pack. You may also receive a

IF are the only player in the Enigma Zone, you are gonna get hit by the special beam over and over. Might as well just exit.

Each ___ ranks of Data Corruption reduces the tier of your rewards. You cannot earn less than one

The following Ranks and Reward Amounts are based upon NO Data Corruption!

If you enter, or re-enter, after the event has started, simply use a portal at the Core Field to go to the current location of the Resark.

If you have even just one Dimensional Data you still get

Enigma Cube ×1 so the best plan is to enter the zone, get ONE Dimensional Data, run back to the Core Field, return to Varanas, hand in the Data and get a cube, return to Enigma Zone, and rinse & repeat. I got

Enigma Cube ×14 this way from a single event where I was the only player running it. If you are faster than me and non-laggy you could probably earn even more.

From March 16th to March 27th, each day, when you log in, you will receive a +1 increase to your Frog Mania rank. Each rank of Frog Mania increases the rewards you are gifted and it's duration to 48 hours but you must wait at least 24 hours to log in again to increase it. Once you reach Rank 5 if you login in the window each day Frog Mania will remain at Rank 5.

Each time you log in it checks if you get a new rank in Frog Mania, and the first time you move it will display how many hours and minutes until you are eligible to rank up. You must log in between this minimum time and the time your rank expires (2 days after last rank increase).

Each day, you will receive the following, a buff, and maybe a

Talk to a Naughty Frog and it will change into; 1) an Angry Frog which attacks you (fight it until its Frog Shield is exhausted}, or 2) a Friendly Frog. Now use the

Magic Cage to get a

In the past few days, magical tornadoes suddenly appeared and dropped Magic Frogs Northwest of Logar. Due to the increased demand for magic potions, Ic Frog Legs Full of Energy are needed in vast quantities to increase the success rate of potion's creation. Go out there, kill the Magical Frogs and bring the Ic Frog Legs Full of Energy to help out with the special event.

Sea of the Frogs[edit | edit source]

Mountain Demon Grass Sap and he will give you a

Now, go to Hending Harbor, use the

As a Frog Warrior, your first 3 skills break Range Mode (Alt-1), Magical Mode (Alt-2), and Bash Mode (Alt-3). Target a Treasure Chest Guard and place your mouse over the effect he has on him to learn if he is in Range, Magical or Bash mode. Use the correct skill to break it and damage him. When defeated he gives you a

Treasure Chest Key (expires in 10 minutes). Find a chest and open it to get a Ic Forgotten Jewel. If needed, you can use the Frog Recover (Alt-5) skill to heal yourself.

The Hidden Treasures have a 2 hour expiration and can be handed in only once per day.

Steer your frog the same way you steer a Cavy to capture it. The frog will always move directly away from you.

She gives you a Ic Frog Elixir which turns you into a frog for 30 minutes and cannot be cancelled.

Target a Magic Frog and use Alt-1 or Alt-2 to curse or compliment him. When joy or ___ reaches 5 you will get Ic Frog Tears or Ic Frog Sincerity. Get 3 of each and return to Flogg Shuiss. Now she gives you

Frog Charm. Find one of the 3 following persons, use the charm, talk to them to try to get some herbs.

Speak to as many of the 3 as you can within the 3 minute potion duration.

If you have an

Herb Gift Box you can exchange it with Caven Jett for one of the following:

If you have a Ic Purple Ostrich Mount (Permanent), a

Savage Ostrich Mount (Permanent), and a

You will need to write down the order of the colored fairies you need. Jump over the fairy when you find it.

All of these involve jumping on the floating disks, so if you are lagged at all you can't possibly do these tasks.

You have 60 seconds to open as many chests as you can. Some of the chest contents are listed below.

If you find a Golden Sheep, kill and loot it for a

Golden Fleece which you can exchange with Kekonee for

You can also trade 6 "cards" to Kekonee to get an

Ancient Treasure Key, but this is not the key you need. The

Jade Treasure Chest Key instead. You can also give

Glistening Jade Treasure Chest x2 to Frank in Varanas Central Plaza (channel 1) instead of opening them.

She tells you the 6 cards you need are

All the best, Ic for, Ic this year's, Ic anniversary, Ic of. and

Runes of Magic. These drop from common mobs throughout Taborea.

This is like a human game of Three Card Monte (Wikipedia). You need to keep track of the real Alalis as she exchanges places with her shadows. When she is done "shuffling" you have just three guesses to find the real one!