From Runes of Magic Wiki
Jump to: navigation, search
For other articles with related titles, see Angry Jekarce.

To find this mob in-game, use BACKSPACE to open the World Search window, then enter Angry Jekarce (Boss) in the Search field and click "Search". Remember, the field is case-sensitive and must be entered exactly as shown.

Amulet of Light. For this reason, we discourage listing them in the Known Drops section. See Common Drop Table for more information. Exception: All mobs always drop the same Production Rune and we will list it. Also see Ystra Highlands (Zone Loot Table) for more information about common drops in this zone.

This mob does not have a Monster Compendium card.

He can be found in the Creature Handbook, the guide written by the legendary Mage Vahtos, due to the fact that he turned into a monster after an accident during an experiment. Whirling his strong fists he quickly stuns his opponents. 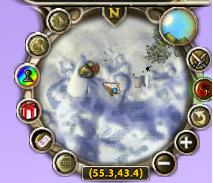